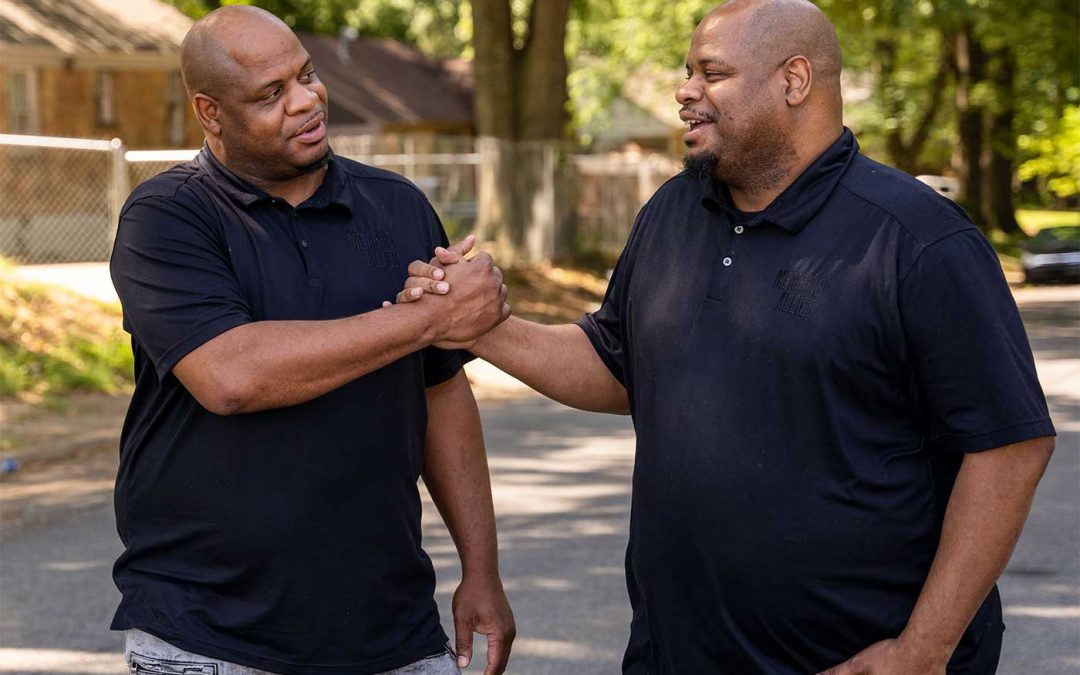 The man was shot and killed in front of his 2-year-old daughter. It was another senseless homicide in Memphis; another child traumatized by gun violence. To Brandon and Bryan Mathis and the Memphis Allies team, this man, this incident was more than just a statistic.

The identical twins are a larger-than-life presence, working together as life coaches on one of the first three Memphis Allies SWITCH teams, serving Raleigh/Frayser.

Brandon and Bryan had met this young man after his apartment in a high-risk complex had been raked with gunfire. They offered him a way out of a dangerous life, and he responded. He was talking to the twins and accepted gift cards to buy groceries for his family — the young man had three children under 5 years old. The circumstances surrounding his murder are still unclear.

Bryan was a pallbearer at the funeral. The young man’s mother asked Brandon to speak.

“I was able to tell the family that this man was changing his life,” Brandon said. “He was meeting with us; he was taking the first steps. That was a comfort to the family.”

Brandon also explained Memphis Allies and even handed out cards with contact information at the end of the funeral service. SWITCH teams are seeking to identify, connect and serve those at highest risk of being involved in gun violence – as a perpetrator or victim. This death was hard; change had not come quickly enough. But it was a good sign that the young man had been on the SWITCH radar.

Brandon and Bryan’s team is working to bring hope to residents who live in the most high-risk apartment complexes in Raleigh and Frayser. 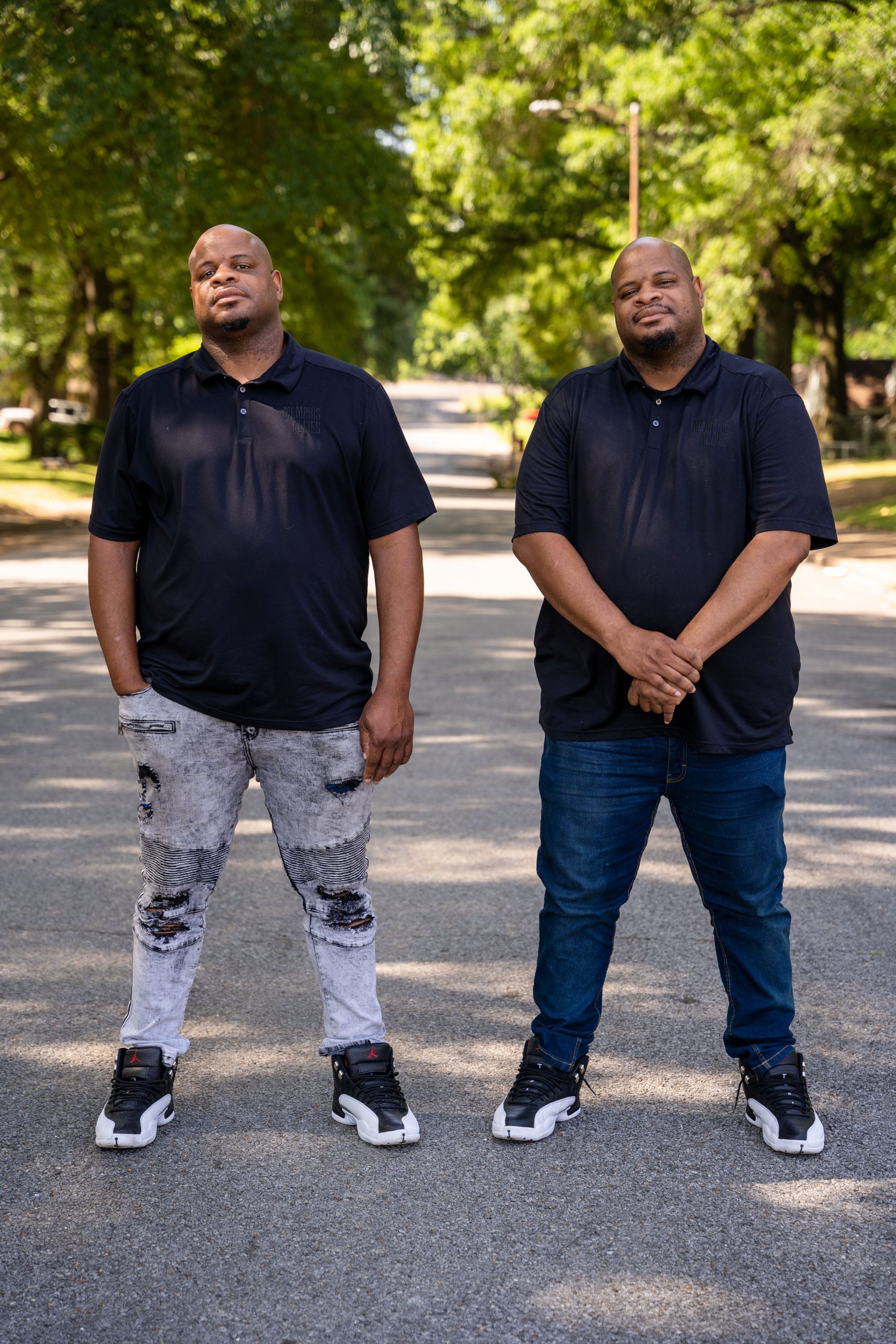 “They’re low income, and we know that poverty produces crime,” Bryan explained. “These places tend to be more violent. You have a lot of people who are members of different gangs, living in the same place.”

Children growing up there need extra support. The twins know about growing up in difficult situations. The two were abused by their father, beaten bloody over trivial things – like not closing the screen door. When teachers noticed, they thought the abuse might end, but their father threatened: “If anyone else finds out, I’ll kill you and your mother…”

They took their pain out on others, targeting bullies and drug dealers. They bounced through nine different schools and were expelled 11 times. At 10, they were asked to join a gang. And they saw it as protection and a way to eliminate their biggest problem: their father. They became YOGs – young original gangsters – leading a group called Unknown Killers, with hundreds of members. The twins were enforcers, keeping gang members in line, masterminding plans for how to get things done without getting caught.

Things changed when they turned 16. Bryan was shot in an incident where members of the gang didn’t have his back. Then, Brandon was charged with attempted murder. Luckily, the case was kept in juvenile court, and he was ordered to talk to a psychiatrist, where the history of abuse and trauma was identified.

“We felt like we had been spared – a number of times, really — and we should start making the best out of our lives,” Brandon said.

They began working to change the lives of young people, forming their own nonprofit organization: TWINS – Together We Impact Nations and Neighborhoods – striving to make every neighborhood safe and prosperous.

The two are talented actors and rappers and found ways to reach youth through plays, music and performances, what they call edutainment. Their productions were part of the Heal the Hood events and they worked for 10 years in Memphis and Shelby County Schools gang intervention program, G.R.A.S.S.Y.

"Memphis Allies was a natural for us. It was a great opportunity for us to work with adults. A lot of the time youth suffer so much trauma, but when they turn 18 people are done. This initiative allows them to get help."

Brandon says that the trauma they experienced, the gang involvement, allows them to make authentic connections – to be heard by high-risk individuals. They believe SWITCH and the Memphis Allies strategy will work.

“You’re investing in a person. You’re eliminating everything that was causing them not being able to change,” Brandon said “We’ll help. Have you lost your Social Security card, basic documents, so you can’t work? We’ll help. Is there trauma that you’ve never talked about? We have counselors. We’ll bring help to you.”

Bryan agrees. “That’s one of the things that makes this program different: accessibility. Being right there for real. For the next 12 to 18 months, you have someone. We’ll call them every day. Help them get stable housing, get them to a job. You know it’s going to be a success.”

The twins say they are seeing the beginning of change in the men now in the active outreach phase of SWITCH.

“We see people who are changing,” Brandon said. “They’re willing to get an everyday job. Wanting to be a father and get back in connection with their kids. Handling responsibilities. Letting some of those habits that have been holding them back go.”

SWITCH team members know they can’t save everyone; they are mourning the young man who died recently. Working with men still involved with gangs, involved in violence, also is personally dangerous.

“We love the challenge,” Bryan said. “We walk into every situation believing that a success is going to come out of it. All of the things we went through in our lives prepared us for these moments.”